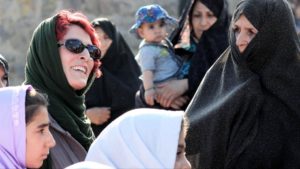 3 Faces is a 2018 Iranian drama film directed by Jafar Panahi and starring Behnaz Jafari and Panahi as themselves. It was selected to compete for the Palme d’Or at the 2018 Cannes Film Festival.At Cannes, Panahi and co-writer Nader Saeivar won the award for Best Screenplay.

The 3 Faces shoot took place in three villages: the birthplaces of his mother, his father and his grandparents. Such a familiar and protective environment greatly facilitated the possibility of filming without risk. Using a very sensitive camera sent by his daughter who lives in France, he was able to work even at night outdoors without the need for heavy equipment. As always, Jafar Panahi wrote the entire script to the smallest detail – although he did make some improvements during the shoot according to the situation. Filming outdoors was a much welcomed situation after his previous movies (This is Not a Film, Closed Curtain, Taxi Tehran) confined to interiors – apartment, house, car. The three villages used in the shoot are located in the northwest of Iran, in the Turkish-speaking Azeri part of Iran, where people in the countryside are particularly attached to traditions, with some aspects still very archaic. The attitude of the inhabitants in the film is consistent with what is still happening in this region.