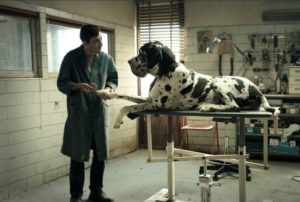 Dogman is a 2018 Italian drama film directed by Matteo Garrone. It was selected to compete for the Palme d’Or at the 2018 Cannes Film Festival.

Marcello (Fonte) is a simple man, a small and gentle dog groomer, whose life revolves around his grooming salon for dogs and his daughter Sofia; Simone is a former boxer with violent ways just released from prison. After a long series of abuses, Marcello decides to help Simoncino (Pesce) in some robberies, but he ends up having to serve a year in prison. Once he left and realized he was alone, Marcello decided to take revenge.