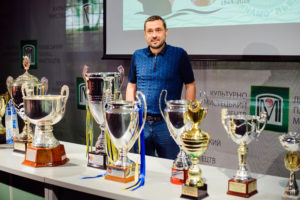 There’s no support from the government, but the oblast council, the city council, the local deputies do show support and I feel it. I think the situation in Lviv now is good for promoting sports, and they help a lot. Ukraine takes no part in this. Mostly the support comes from individuals from the city and the region. There are lots of people in sports who know how bad the situation is. So they’re inspired to encourage and help others. This leads to some results. The rest we have to do on our own.

Practically no. This sport isn’t very popular in Ukraine, so brands have no interest in supporting it.

What’s the situation like around the world, where is water polo popular?

How do these countries popularize this sport?

Over there, water polo is as popular as football. In Hungary, Croatia, Serbia. So we have Croatians playing here. They start playing this sport at four, and it’s supported on all levels. They play all over the world. So these countries play in world championship finals – Croatia, Montenegro, Hungary, Spain, Greece.

Have Ukrainians ever been Olympic champions in water polo?

Only back in the Soviet Union. In 1988, the USSR took bronze. The team included Smirnov, he’s from Lviv. Berendyuga was also from Lviv. The 1989 junior team were world champions in 1985 and 1986. After the collapse of the Soviet Union, sports declined because there was no more state support.

You plan to promote not only water polo but also other sports. Which ones and how are you planning to do it?

There are no sports programs on Ukrainian TV. In the Soviet Union, after the news and before the weather they had sports reports. Ukraine has ditched this tradition. Should it be returned and what role does sport play in a person’s life?

In the Soviet Union, and everywhere in the world, like in America, for example, the person who wins a world championship and glorifies their country becomes super popular. But here they just get forgotten because the state doesn’t need them, nobody needs them. So they get famous and then they don’t know what to do. While in countries like America, Germany, or England, people who made their country famous, whether it’s in music, sports, culture, these people are always carried high. They’re on TV, they’re everywhere. We don’t have anything like that, not in culture, education, or sports.

Why did you choose water polo? What makes this sport so attractive to you?

I believe it’s the best sport for children’s development. Because it makes you play in the water, so all your muscles are active. It’s a very fast game, where you have to think fast. And there’s no result unless there’s teamwork. So you need good health and good brains to think.

Are you satisfied with the results you’ve achieved in recent years?

Without basic facilities, without the correct pool for a water polo academy, we can’t achieve much more. Basically, we’ve achieved everything in Ukraine: we’re almost always champions, we win cups and super cups. We win everything that can be won in Ukraine. Now that we have an opportunity, we’re building a new pool to found the water polo academy. Because our Olympians, who are one of the best coaches in the world, are now coaching abroad. But once we have the facilities, they’re willing to come back to Ukraine and work for their home country.