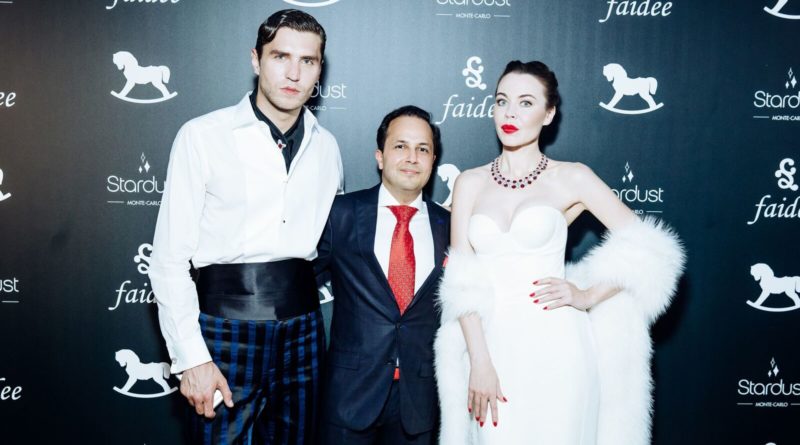 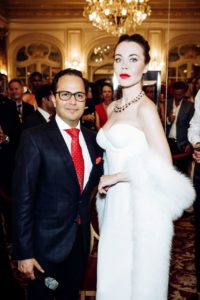 Faidee Director Ravi Lunia and Russian fashion designer Ulyana Sergeenko have collaborated to present the inaugural Burmese Ruby Exhibition – the first of it’s kind in the world. The exhibition takes place at one of the most glamorous settings imaginable; the Hermitage Hotel in Monaco, between the 1st and 21st of August. An exclusive collection of Faidee jewellery masterpieces were presented to VIP guests, influencers and celebrities during Ulyana Sergeenko’s fashion show on the 3rd of August, followed by the grand reveal of a very special Faidee masterpiece.

It is the first time in the history of jewellery that over 100 extraordinary pieces using natural Burmese rubies have been showcased in one place. A variety of never-before-seen necklaces, rings, earrings and bracelets, created over four generations, was presented to a selection of jewellery insiders and fashion aficionados in the comfort of luxurious Salon Belle Epoque at the Hermitage hotel. Each piece of jewellery has been created in a completely unique design, and the inspiration behind each piece is widely varied; from the wonders of nature, to the intelligence of architecture, and even the geometric motifs of  art deco period. 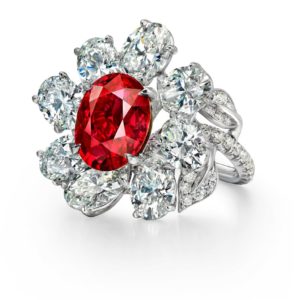 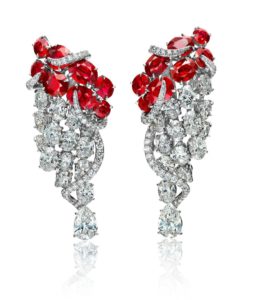 On the night of the event, specially selected guests were invited to admire the most ethereal treasures of the Mogok Valley, and enjoy the private fashion show of Ulyana Sergeenko Couture and Demi Couture line, accessorised and completed by Faidee jewellery masterpieces. The terrace of the Hermitage Hotel overlooking the bay was transformed into a runway, where the 250 privileged guests from all corners of the world were treat to a display of the largest and most high quality collection of natural Burmese jewellery in the world. 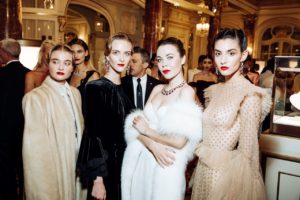 Revelation of The Imperial Necklace 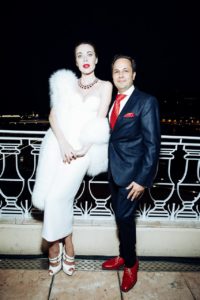 For the grand finale of the evening, Faidee revealed an extremely important piece of jewellery – ‘The Imperial Necklace’. The Russian style icon Ulyana Sergeenko was invited to be the first one to try it on, demonstrating the beauty of the masterpiece to guests. The necklace featured an unimaginable amount of perfectly colour matched, unheated Burmese rubies of the most coveted and valuable ‘Pigeon blood’ hue, combined with top quality diamonds.

“It is a piece of jewellery that no one could have created before, due to the scarcity of Burmese rubies with this highly desired natural ‘Pigeon Blood’ colour. Even those of us within Faidee never imagined that something like this would one day come to life. The Imperial Necklace is a piece of jewellery that took 4 generations of our family to create! Our great-grandfather Roop Chand Lunia, who was known as the ‘King of Burmese Rubies’, selected many gems throughout of his career and build an extensive collection of natural Burmese rubies. Some of these gems are still within Faidee’s possession today – so we decided to use over 50 of them to embellish ‘The Imperial Necklace’, making it the best example of natural Burmese jewellery in the world.” says Faidee Director Ravi Lunia. Eight of the super gems in ‘The Imperial Necklace’ exceed 5 carats each – as well as setting the benchmark for the finest saturation and clarity in natural Burmese Rubies. A hundred carats of colourless D-colour diamonds boasting a Flawless and Internally Flawless clarity grade were used to complete the remarkable showpiece. ‘The Imperial Necklace’ is a timeless masterpiece for a collector to treasure.

Organised by the Monaco-based agency Lazurevents, the exclusive occasion created a buzz in the worlds of jewellery and fashion, within this luxurious destination in the South of France.  Presented by the Stardust Monte-Carlo, a long-time Monaco-based luxury jeweller, this First Burmese Ruby exhibition will take place at the prestigious Hotel  Hermitage,  Salon Belle  Epoque,  Monaco,  Monte-Carlo, from August 1st to August 21st, 2017. 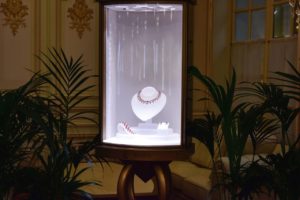 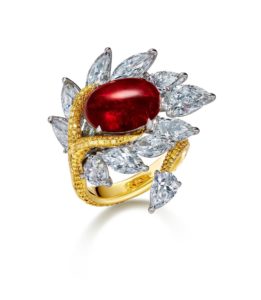 The origins of Faidee lie at the beginning of the 20th century with Roop Chand Lunia, also known as the ‘King of Burmese Rubies.’ His grandson Rajeev Lunia is now leading the family business, continuing the tradition with even more passion and perfection in bringing out the very best in Burmese rubies. 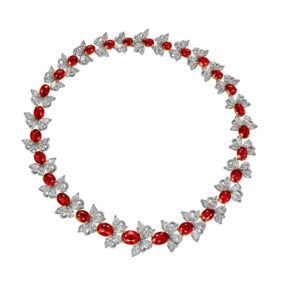 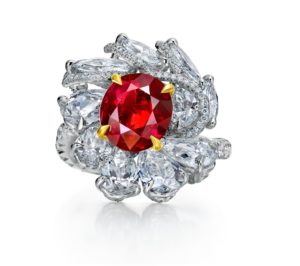 Auction houses like Christie’s and Sotheby’s have previously sold jewellery from Faidee’s private collection for record prices: the 10.05-carat ‘Ratnaraj’ ruby and diamond ring was sold for US$ 10,200,000, achieving the price for a ruby at just over US$ 1 million per carat; the Mogok’s Fiery Red set was sold for US$ 10,340,000; and The Red Emperor ruby-and diamond necklace was sold at Sotheby’s for US$ 9,900,000, which set the world record for the highest price of a diamond and Burmese ruby necklace sold at auction at the time. 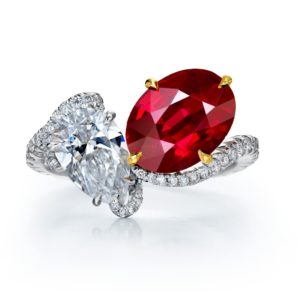 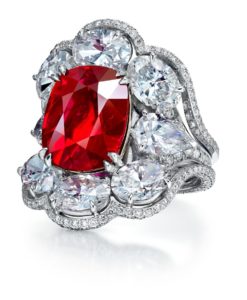 A Burmese origin is considered the most quintessential class for rubies as they have an intense, vivid red ‘pigeon’s blood’ colour coupled with resplendent natural fluorescence. Being the only company in the world to deal exclusively in Burmese rubies, Faidee creatively uses these extremely rare and exceptional stones in unique designs that have an essence of ageless beauty. Faidee fastidiously strives to bring scintillating gemstones and first-class fabrication together in the form of vibrant jewellery, featuring stellar workmanship by both nature and man. 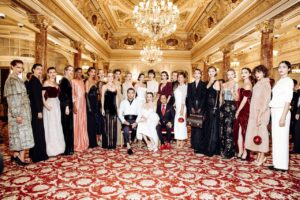 Ulyana Sergeenko Couture held its debut show in 2011 and is already sharing the catwalk with Chanel and Balenciaga. Ulyana Sergeenko, the designer, is known as the Russian lady, a Russian matryoshka and a style icon à la russe. Her trademark looks of full ankle-length skirts, chaste, high-necked blouses, scarlet lips and headscarves knotted at the back have become fixtures of fashion reports and reviews with their unusual combination of modesty and sexuality. The upsurge of interest in the West in à la russe style and Russian retro can be, to a great extent, attributed to Sergeenko. 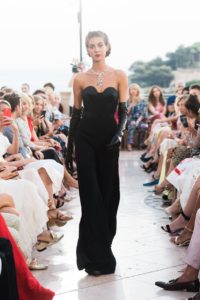 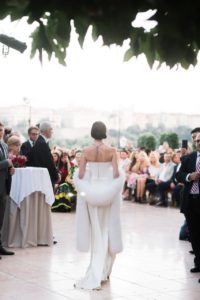 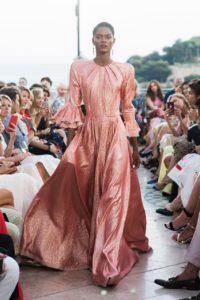 Most of her clothes have been made-to-order or given clever makeovers with decorative details. This is where the story of the Ulyana Sergeenko brand began and gained worldwide popularity. Its clients today include Sheikha Mosa, Kim Kardashian, Lady Gaga, Prianka Chopra, Aishwarya Ray, Sarah Jessica Parker, Anna Dello Russo, Carine Roitfeld, Natalia Vodianova, Miroslava Duma, Kseniya Sobchak and other celebrities. 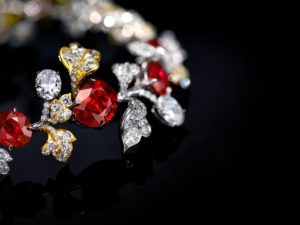 Stardust Monte-Carlo is a Monegasque three-generation jewelry company whose main focus has always been on crafting and selecting the best jewelry pieces for its international clientele. The company is well known for its collection of rare natural pearls, important fancy color diamonds and the ﬁnest colored gemstones. 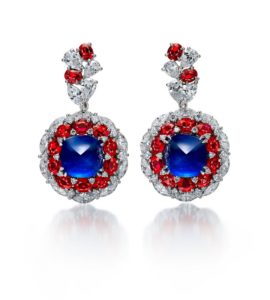 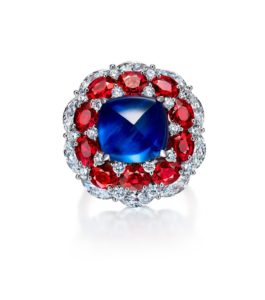 For three generations Stardust has been taking care of some of the wealthiest families in Europe and their jewelry collections. Today, Stardust Monte-Carlo has a very solid customers base from Russia, Azerbaijan, Kazakhstan, Arabic countries and China which come from all over the world to admire the unique pieces that Susanna, founder and creative director, realizes. 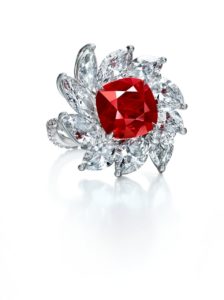 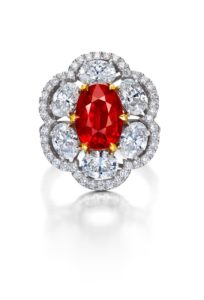 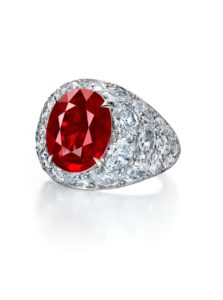 For the last 5 years Stardust has been giving brilliancy to the Monegasque jewelry scene with incredible jewelry exhibitions showing to the public the rarest gemstones on Earth.