BerinArt and the Grand Moscow Classical State Ballet of Natalia Kasatkina and Vladimir Vasilyov are happy to present the enchanting ballet production of “The Nutcracker” by P.I.Tchaikovsky.

Being one of the most popular ballets in the world, “The Nutcracker” version created by The Moscow Classical State Ballet is a colorful and beautiful masterpiece that celebrates music, authentic choreography and festive atmosphere of the winter season. The creative producers carefully conveyed the fascination of the fairy tale and, at the same time, introduced the spirit of a romantic mystery and genuine feelings into the show. This outstanding, magical performance would definitely engage both children and adults.
The current production preserved the famous choreography by Vasily Vainonen featuring the dance of the dolls, Waltz of the Snowflakes, the Flower Waltz, and the Grand Pas de Deux performed by the main characters. By contrast, the first act has undergone a complete adaptation in a new version by Natalia Kasatkina and Vladimir Vasilyov. It includes the procession of the guests along the city streets blanketed with snow, merry turmoil under the Christmas-tree, young people running around and reserved joyance of the older generation.
The Grand Moscow Classical State Ballet premiered its production of “The Nutcracker” while touring the US cities. Although every December the Americans can choose from about 150 different versions of the famous ballet, the media recognized the adaptation presented by Kasatkina’s and Vasilyov’s company among the best ones. 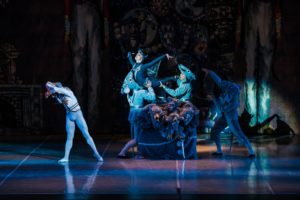 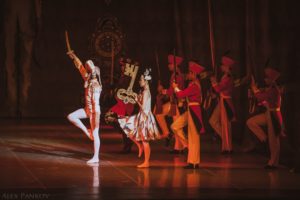 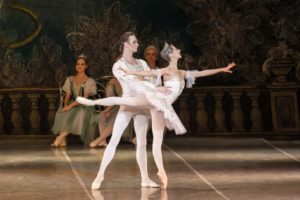 Born in Moscow, Natalya Kasatkina and Vladimir Vasilyov graduated from the School of Choreography of the Bolshoi Theatre and were among the brightest stars in the Bolshoi’s firmament in the 50s through 70s. Vasilyov and Kasatkina met during their tenure with the Bolshoi and united their choreographic talents in 1959. They staged ballet productions both at the Bolshoi and Kirov (now called Mariinsky again) theatres, and many of their ballets became bright jewels in the crown of Russian and world culture.
In 1977, they joined the Moscow Classical Ballet. Natalia Kasatkina was appointed to the Principal ballet master and Vladimir Vasilyov – General and Artistic Director. Nowadays, the company has 63 dancers and its high creative potential is recognized by the European, American and Russian critics. It is one of the leading Russian ballet companies. According to a kind of unofficial rating the Grand Moscow State Classical Ballet of N.Kasatkina and V.Vasilyov stands right after the Bolshoi and Mariinsky companies. 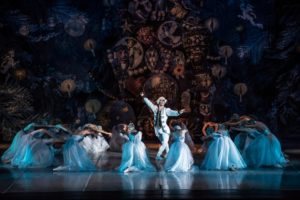 Original productions brought them recognition as innovators and allowed to develop new forms of choreography, as they worked to find a new language in dance. They created their own ballet style joining classical traditions and modern elements. They also added new life to a number of classics.
The company`s soloists are high in demand at the International Ballet Competitions. They have won 19 gold medals and also got 5 Prizes and 2 Grand Prix of the Paris Academy of Dance. Natalya Kasatkina has also won «Five Hundred Leaders of Influence» by the American Biographical Institute.
At present, there are more than twenty ballets produced by Natalia Kasatkina and Vladimir Vasilyov.
Over fifty five performances of their librettos have been staged around the world. The company has successfully performed in more than thirty countries around the world (the USA, Israel, Spain, Portugal, Germany, Italy, France, Greece, The UK, the Benelux, Switzerland, South Korea, China, Mexico, China and many others) and over two hundred cities in Russia.
The recent project by Natalya Kasatkina and Vladimir Vasilyov is to create a Russia International Ballet Art Center, which will be situated in the central district of Moscow.