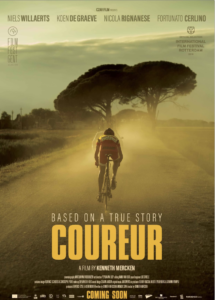 ROTTERDAM / BRUSSELS, 3 JANUARY 2019. The Belgian feature film ‘Coureur‘ will have its international premiere in the ‘Limelight’ programme of the ‘Voices’ section at the 48th International Film Festival of Rotterdam (23 Jan – 3 Feb). The semi-autobiographical debut by Kenneth Mercken features Belgian & Italian talent Niels Willaerts, Koen De Graeve (‘The Misfortunates)’, Karlijn Sileghem (‘Home’) and Fortunato Cerlino (‘Gomorra’, ‘Hannibal’) among others.
‘Coureur’ follows the struggles, glory and dreams of a young cyclist who will do whatever it takes to succeed, no matter the consequences for himself and those around him. The film was selected for Binger Writers Lab, Script & Pitch at TorinoFilmLab, Les Arcs coproduction platform and received the Emerging Talent Award at When East Meets West in 2014. Moreover, the project also won the Flanders Next ‘Pitch Perfect Award’ in 2016.
Felix grows up as an insider at his father’s veteran league cycling races, an outlandish milieu with no shortage of alcohol, violence, and prohibited substances. He wants to become a pro no matter what, like his father Mathieu, who seeks to fulfill his own failed dreams of cycling glory. When Felix becomes national junior champion, he follows his own path towards the promised land of youth cycling: Italy. The merciless competition and his feeble health, however, threaten to become his downfall.
‘Coureur’ is inspired by director Kenneth Mercken’s own turbulent past as a talented cyclist. Kenneth also grew up among the frames and the smell of leg cream. But it took a while before he really got serious about cycling. In 2000, he won the national championship for elite riders without a contract. Later, while on the payroll of an Italian team, he discovered that his body couldn’t cope with all the hardships of the sport and the sacrifices he had to make in order to reach his goal. He turned his back on his childhood dream and enrolled in film school.
‘Coureur’ is produced by Eurydice Gysel and Koen Mortier for CZAR Film, in coproduction with Climax Films (BE) and KINO Produzioni (IT) as well as CANVAS, RTBF and BNP Paribas Fortis Film Finance, which provided part of the financing through the Belgian Tax Shelter system. The project was supported by the VAF / Film Fund from Flemish Minister of Culture Sven Gatz and Le Centre du Cinéma et de l’Audiovisuel de la Fédération Wallonie-Bruxelles. In addition, the Screen Flanders economic fund, an initiative under the authority of Flemish Minister for Economic Affairs Philippe Muyters and Minister of Culture Gatz, IDM Südtirol Alto Adige and Friuli Venezia Giulia Film Commission also invested in the film. International sales is handled by Intramovies and distributor Paradiso Filmed Entertainment will release the film in the Benelux.