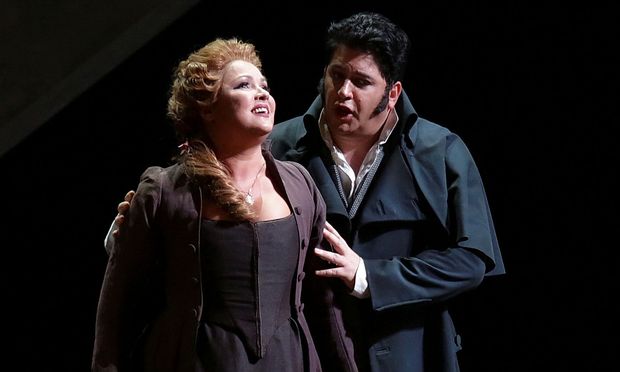 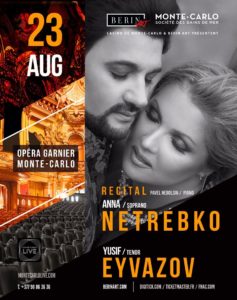 A celebration of the world’s best opera voices,Anna Netrebko (soprano) and Yusif Eyvazov (tenor),live in concert, on August 23rd, at the Opera Garnier Monte-Carlo.

Anna Netrebko has redefined the meaning of being an opera star.

Today’s reigning prima donna routinely headlines major productions at leading opera houses across the globe. She was the first classical musician to be chosen as one of the “Time 100,” Time magazine’s list of the world’s most influential people. With her distinctively beautiful voice, abundant charisma, and arresting stage presence, she makes an indelible impression with each of the roles she portrays.Together with her husband Yusif Eyvazov they form a breathtaking couple on stage. Born in Baku, Azerbaijan, Eyvazov mastered his professionalism in Italy. Critics call him “an exciting tenor whose pure human voice trained to do exceptional things reaches us in a way that no other sound does…” His sound is metallic, stentorian and markedly Italianate. Yusif Eyvazov appearances feature the Metropolitan Opera, the Wiener Staatsoper, the Paris Opera, the Staatsoper Berlin, the Mariinsky Theatre and others.Come and discover a unique evening with sopranoAnna Netrebko and tenor Yusif Eyvazov. For one night, only at the exclusive Opéra Garnier Monte-Carlo, two opera’s biggest stars will perform a recital concert in a very special atmosphere. The audience will enjoy dazzling arias by Verdi, Puccini, Strauss, Rimsky-Korsakov and many others. The world’s best opera voices will perform their favourite pieces which they have personally chosen for this unique recital.

The 27th Annual Screen Actors Guild Awards, which honor some of the year’s best performances in film and television, aired