For the first time since the Abraham Accords, two fashion magazines from Israel and the UAE join forces for a historic cover collaboration celebrating talents from both countries. Proving that when societies thrive, business thrives – and that fashion and politics go hand in hand. 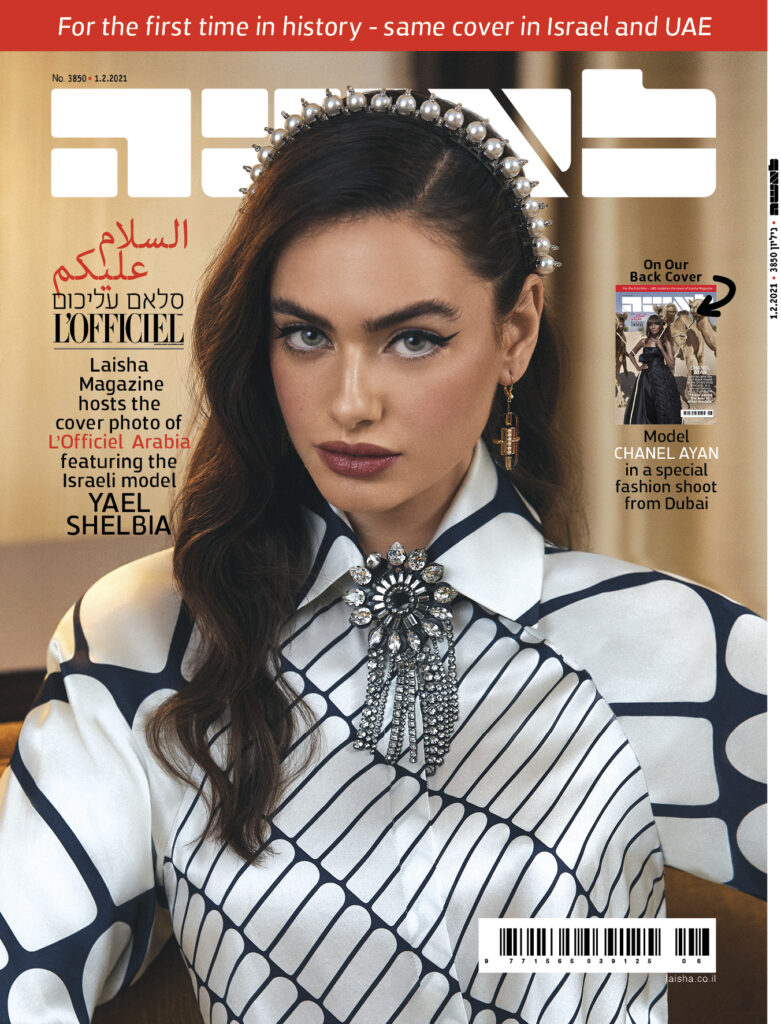 In that spirit, fashion entrepreneur Anna la Germaine, founder of media and consulting company Fashion Politique Ltd. has kickstarted and completed one of the most ambitious fashion diplomacy initiatives of the year. Thanks to her efforts, top Israeli model Yael Shelbia appeared on the cover and in the pages of the February issue of L’Officiel Arabia, shot by Israeli photographer Yossi Michaeli and wearing a look by Israeli designer brand MICU. On the other hand, Israeli fashion magazine LAISHA honored this historic moment by putting the same image on the cover of its issue coming out on February 1st and featuring the special shoot in its pages. At the same time, LAISHA dedicated its back cover to Dubai-based model Chanel Ayan photographed by Adam Browning-Hill, and publish coverage of the fashion and luxury scene in the UAE. “Fashion and Politics are inseparable, and the successful combination of both creates the ground for a flourishing business resulting in thriving economies of the countries. With Yael Shelbia on the cover of L’Officiel Arabia and Chanel Ayan on the cover of LAISHA we are aiming to celebrate new business opportunities between UAE, Bahrain, and Israel.”, says Anna la Germaine.

For the first time since the signing of the Abraham Accords between Israel, UAE, and Bahrain in September 2020, an Israeli Model appears on a UAE Magazine’s front page. A fashion publication LAISHA from Israel promotes a UAE talent Chanel Ayan on its cover. Israeli top model Yael Shelbia is a 19-year-old upcoming industry star with 1,3 million followers on Instagram, who has modeled for Kim Kardashians’ KKW Beauty and was recently named the most beautiful face 2020 by TC Candler and the Independent Critics.

L’Officiel Arabia is a Dubai-based High-Fashion magazine published by Chalk Media FZ LLC under Jalou Media Group’s license in Paris. As an influential voice in its region and abroad, it makes a perfect partner for LAISHA Magazine, Israel’s most successful magazine, published since 1947 by Israel’s leading publisher, Yediot Ahronoth group. LAISHA equally makes a strong statement by putting a top model from the UAE on its second cover, which will be visible on the same issue when you flip the magazine. Chanel Ayan is originally from Kenya and made history as the first black model successfully making a career in the UAE, having appeared on Vogue Arabia and Elle Arabia and worked for Valentino and Chanel’s brands. She is also the face and ambassador of Dior Make-Up in the UAE.

Both covers are parts of a milestone that reflects a new chapter in the history of Israel’s relationship with the UAE and Bahrain. Following the recent peace agreement between the countries, this collaboration symbolizes the unique potential for opportunities for fashion, lifestyle, and luxury brands and the promise of progress for creative ideas and business partnerships on all sides. Anna la Germaine is a former student of International Relations who graduated with a Masters Degree and decided to apply her expertise in politics and diplomacy to fashion. She called her firm Fashion Politique accordingly, starting in 2011 as the digital magazine F’OLITIQUE, which exists today. The company has since developed a 360-degree range of services focusing on emerging and medium-sized brands and digital space endeavors.

La Germaine’s holistic approach to fashion and its talents, as well as her belief in their strong impact on society, lead her to start working on this project in September 2020. It took months of negotiations and planning to make the vision become a reality. “L’Officiel is known for breaking boundaries and pushing forward the future of fashion. I’m proud that we are the first in the region to carry out a cover shoot with Yael Shelbia, post the signing of the UAE-Israel peace accord.”, says Editor-in-Chief of L’Officiel Arabia, Boba Stanic. Karina Shtotland, Editor-in-Chief of LAISHA, says: “We are happy to congratulate Anna la Germaine and L’Officiel Arabia for choosing an Israeli model for a cover, the talented Yael Shelbia, and for giving Israeli fashion a wonderful stage. We are excited to be her partner on this groundbreaking first-ever international collaboration, when two major magazines from different countries – who have just signed a historic accord – share a cover, promoting a message of peace, brotherhood (or shall I say sisterhood?), and cooperation, that bridges and unite between our nations. Shtotland adds: “It is our pleasure to have on our second cover a successful model from the UAE, Chanel Ayan. The women of Israel are eager to be introduced to UAE women and learn more about them and all aspects of life and culture. No doubt, celebrating talents, fashion, and creation – is a wonderful way to tie connections and to build a strong and fruitful peace”.